As you may know, this blog is being updated by Elise's mom when the weekly email is received.
As you may NOT know, I am not a blogger.  It's obvious, isn't it?  (Sigh.)  Consequently, this is a bit of a journey for me as I learn.  Elise [now addressed as Sister Nelson] was kind enough to set up the blog to her liking along with some instructions.  Until I get the hang of this, please pay no attention to said instructions.  I actually smile when I read them, since they are soooo Elise--I mean--Sister Nelson.  (It takes some getting used to, doesn't it?)  Occasionally, I may include some commentary in brackets.  It's meant to be helpful; we'll see how it goes.  I'll be adding pictures as they come in, so stay tuned!  In the meantime, go to the home page, get her Provo MTC address [you only need the MTC mailbox #312 and the BRA-RIO 0424 codes], then go to dearelder.com, and write to her for free until March 13 [now delayed 1-2 weeks].  Hurry!  Time is running out!!!


On Wednesday, February 22, at 1:10 PM, Sister Elise Nelson, her parents, and her oldest brother pulled into the entrance of the Provo, Utah MTC [Missionary Training Center].  The girl was already squealing.  The kind gentleman greeter looked at her and said, "Sister Nelson, you have a great smile.  You are going to do terrific out there."  As we followed the curb to our designated spot--lucky #21--she could hardly contain herself.  The squeals, the laughter, the excitement...it was as if she was finally opening the gift she had wanted for YEARS.  Because of her jubilance, we found it difficult to be sad as she said her final good-bye and hugged us all.  As a matter of fact, we were cheering!  She is exactly where she knows God wants her to be, doing what she knows she is supposed to be doing.  She DOES have a great smile, and she IS going to do terrific out there...with God at her side.  We sure love that girl. 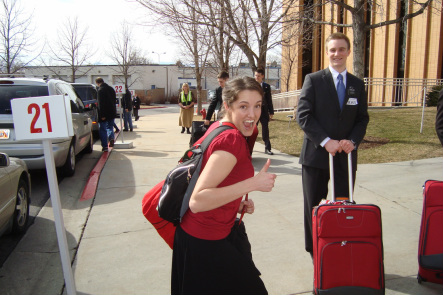