Prayers ARE Answered, and Miracles DO Happen!

On Friday [March 9], my companion and I were allowed to schedule our day because the rest of our English district had in-field orientation, and the two of us did not.  We got up early, had breakfast, got a haircut (thinning & layering; nothing drastic), had personal study with our teacher, Brother Crandall, and then got to go to the TEMPLE with two other teachers (Brother Sikahema & Sister Shumway).  It was probably the BEST session I’ve EVER been to.  While my comp and I were waiting in the chapel for our teachers, I prayed for a miracle:  I prayed I’d run into someone I knew whom I could hug.  In other words, I NEEDED A HUG.  As we were heading upstairs, who do I see but my cousin Kira Dalton Bingham!  Oooh, please tell her she was my miracle!  Tell her sorry I didn’t ask her about her life; I was just so shocked my answer was given and ordered even BEFORE I uttered the prayer.  Tell Kira thank you and I love her.  I LOVE going to the temple!
MOM!  You rock so much.  THANK YOU SO MUCH for taking care of my camera.  It was such a miracle and blessing.  AND THANK YOU for the box.  It was such a tender mercy and godsend.  I’m so lucky to have a support system.  Jessi N., YOU are the CUTEST!  Thanks for the “hug” you made!  I showed it to my district, and everyone was jealous.

Thanks for ALL the love and support!
~Sister Nelson

Letter written home dated Tuesday, March 13, 2012
That evening, right after class started, I realized I had lost my camera’s memory card; and THAT was the last straw.  I was already sick with worry about my broken camera, and Sister Sessions and I felt we had lost our momentum and were becoming cynical.  It wasn’t helping that we knew our English district was leaving for the “big leagues” soon, and we would start learning our language here instead of Sao Paulo because our visas hadn’t arrived yet.  After realizing my memory card was gone, I was fighting back the tears.  Brother Sikahema took my comp and me to a different room and just listened.  He just sat there, deep in thought, while we sat there and expressed all our concerns.  Looking back on it, that was probably his way of spiritually hugging us.  All he could do was invite the Spirit to comfort us because, sometimes, words just don’t cut it.
Brother Sikahema was silent again; and I turned to my comp and choked out, “Sister Sessions?  After the mission, you said you wanted to run a marathon with me, right?  Well, right now, will you take one more step with me?  Let’s take one more step, go one more day.  Let’s run until our limbs fall off because there ain’t no mountain high enough…” or something to that extent.  I think I also mentioned how Satan has been working hard on us, so let’s work even harder.  That’s right!  Wow, I think I would have gone bonkers by now if I hadn’t had Sister Sessions as my companion. 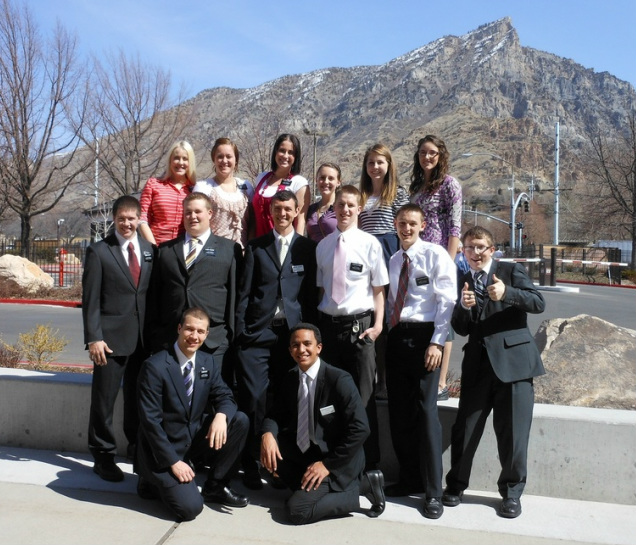 The final group picture with the entire district including the teachers, Brother Crandall and Brother Sikahema. In two days, Sister Sessions and Sister Nelson start Portuguese language training , while Sister Arnold starts Tagalog. Everyone else is heading to the mission field.
We got our schedule for the Portuguese program, which Sister Sessions and I will start tomorrow [March 14].  We will now have p-days on MONDAY and our new mailbox is #312.  Crazy to think that by the time we’re done with the MTC experience, we will have been in 3 districts.  Our new classroom is now 18M-463.  I have a feeling like Troy was in this building for learning Mandarin.  Sister Sessions and I ALSO get to stay in the same bedroom, and we’re still each other’s companion!  TENDER MERCIES!  She’s the BEST companion in the district!  We still freak out when we think we’ll have to get different companions down in the Sao Paulo MTC.  However, Sister Sessions and I promised that no matter who gets the visa first, we’re sticking together.  That is such a relief because I think SHE will get hers first, and she has flown internationally before.  Visas are SO random!  Some people got their electronic visas a week ago and leave tomorrow.  It seems like sisters are having a tougher time getting visas.

Recently, another role play lesson taught me how you can have a good lesson, you can teach doctrine well, and you can feel the Spirit; but it’s all just words and feelings until you ask them to commit to do something based on what they’ve learned and what they’ve done.  Blessings are predicated upon obedience; obedience is the act of faith.  If you want to grow spiritually or receive more light or get an answer, you MUST work.  You MUST put in an effort to change.  You must submit to God’s will.  GO and DO, don’t SIT and STEW.