Shout-out:
LAURA!  LAUREN!  I knew those wonderful girls would give in to serving a mission.  ;)  jk

ALL MY PAST ROOMMATES!!!!  Let’s think if I can name them all:  Kira W, Melissa K, Heather W, Jackie P, Julie (New Name), Dwynne, Alexa, and Kelly McLeod—oops!  (Handy.  Yes, I’m still getting used to it, too.  Haha.  THANKS FOR THE LETTERS!  YOU’RE THE BEST!)  So glad to see that two of them—I know for sure—are recently married, two are on missions, and one is in grad school in England!  These ladies are super stars.
Farewell Fanfare
There was supposed to be a ward Family Night this past Monday.  Super cool, right?  After all, a ward does act as a family.  However, they decided to change it the weekend before.  So, then, instead of praying for the contacts we invited on the street to come, we prayed that they would forget about the activity we said was to be on Monday and decide to come to church instead.  Haha.  Turns out that they wanted to do it on Tuesday to coordinate with the Relief Society activity where they would make “salgadinhos.”  They’re like pastries or pot stickers (sort of), things you would serve at receptions... actually… it covers everything that is fried or baked, really.  The problem was that it was SUPPOSED to start at 7pm and didn’t start until 8:30, which is when we needed to leave.  Hahaha.  I just shake my head.  They hastily started the Family Night so they could sing the song “A Friend” to Sister Diller.  I didn’t recognize it… nor could I have recognized it if I DID know it because… hahahah… wellll... they’re Brazilians.  No offense, but Brazilians aren’t the best singers.  I just had a thought:  Sister Diller will be the first companion who can read my blog!  Straaaaange.  HURRY!  QUICK!   Erase all the bad things I wrote about her, hahahahha!

Sister Nelson on the Beach with the Cabo Frio (Cold Cable)
There have been some pretty cool blessings for “killing someone” [mission lingo for sending a companion home] on the mission; there have been some very worthy stories.  Our final official lesson last night went something like this:

We were trying to hustle to hit our 140 contacts for the week.  So, when a man emerged from a less-than-lit alley street, we pounced on him.
Sister Diller:  Hi, we’re missionaries of the Church of Jesus Christ of Latter-day Saints.  Here’s my friend.
Sister Nelson:  Hi, I’m Sister Nelson.
Sister Diller:  How are you?
Man:  Look, I’m gonna be straight with you.  I’m drunk.  Really drunk.  I have tons more beer at home down the street, I bought a gun, and I have 15 bullets.  I’ve lost everything.  My wife moved and took my 3-year-old son with her, and I’m thinking of killing myself.

Sister Diller later recounted that she wasn’t sure to run or... what.  I wasn’t understanding much of what he was saying.  I was just thinking, “Eh, another drunk.  Cool.  Let’s just pray with him because there’s nothing much we can do for him.”  When he started to cry, I got a little bit more worried and thought, “Shewwwt, here comes his whole life story.  Welp, there goes our contacting for the night.”  Sister Diller turned to me and had me find the story of Alma the younger.  While I was busy finding it, he said that God doesn’t love him and that he was unworthy of repenting.  He said that he used to be an attorney with his brother, and his other sister was a big deal, too.  They always make fun of him about how he threw away his life and how his plaque of attorneyship could be hanging up on his wall but that he hardly has a wall to hang it.

We sat down there on the street with him as he showed us his fresh wound of a motorcycle accident.  I ended up getting frustrated because...
#1  I couldn’t understand him, and it wasn’t like he was talking too badly; and
#2  I couldn’t find the scripture.  I was there in Alma 37, trying to read in Portuguese; and that darn language barrier just rewrote the words on the page to read, “This is a foreign language.  Good luck.”  When I stopped to love this man whom God had guided to us, I wanted to express how much He loved him (it was A LOT, I could feel it); but I couldn’t even speak.  Boo.  However, he was fixated on what I was trying to say.  I was trying to say that Jesus Christ already paid the ultimate price and that His grace is sufficient for the vilest of sinners.  He would never forget us nor give up on us because He has graven us in His hands and has passed through every pain we have felt.  I did manage to say, “He does know what you are going through and has already known the pains you feel.”  He said it was quite a phenomenon that we caught him right as he was leaving his house to roam aimlessly.  I said I don’t believe in coincidences.  He looked confused and said, “Like nothing has purpose?”  No, everything has a purpose to God.  Every situation like this is on purpose.  We gave him a Book of Mormon with Alma 36 marked to reread, and he said he would go to church.  Better yet, his name is Nielson.

At times, I forget that the fullness of the gospel DOES change lives and really CAN help any person on the street.  It’s true.  There was a man Sister Diller contacted when she was with Sister Taylor who came to church.  He just walked in while we were having classes.  He said he was really interested in the English class but forgot where the church was.  He remembered Avenida America Central, so he looked it up on the internet and saw just how many churches we have worldwide (count it!).  He then decided to walk all the way down the street to try and find the church… and did!  We tried to get him to stay for Sacrament Meeting, but he declined saying that he felt out of place with his shorts.  We got his address, and he will go to English class and invite his family to church next week!  Score!

A Pinch of Sol [sun] and lots of Dor [pain] and lots and lots of Agua [water]
Tuesday we had a zone conference which consists of 2-3 hour bus rides.  Yuck!  I was feeling nasty afterward; and by the time the Family Night began, I was feeling like I needed to throw up and had body aches.  We got out of there, thankfully, because I was feeling sick or else the ward would have made us break
curfew.  (For sisters, curfew is 8:30 if not teaching.)  Oh Brazilians, they act like they can do whatever with us, haha.  That night, taking a shower was painful.  The water was pelting my skin, even though it’s more like a trickle.  I couldn’t lie down without feeling like throwing up; and the body pain was so bad, I couldn’t get comfortable.  I spent most of the night in the bathroom and decided in the morning to take the day off.
I drank practically all of those PowerAdes and refused to eat much for most of the day.  I improved by bedtime but felt bad that we had to cancel district meeting.  Well… let’s be honest… more like district party for Sister Diller.  The zone conference was a 10 minute party at the beginning, too.  Elder Martins bought a huge confetti shooter which was the bomb... is that against the rules?  Did I mention… I LOVE MY ZONE! Hilaaaaaarious people.  Elder Goodrich, boy Genius, or Elder Geeves, who tells stories like Ben does.  Hilarious. We have the only two Chileans in the mission (ROCK IT!), and Elder Morais reminds me of Nacho Libre and talks like him when he speaks in English, hahaha.

I asked Bishop on Thursday for a priesthood blessing; and, afterward, he asked my symptoms.  He told me this happens often during summer.  I have to drink MORE water.  (Is that possible?  I already go the bathroom hourly!)  Bishop also said I need to make more juice concoctions.  He said use beet, carrot, cilantro, orange juice, and a squeeze of lime......ok?  Maaaaybe I’ll just stick with my PowerAde.  Haha.  Summer is DANGEROUS.  Most hot things are dangerous.  Like me.  Baaahahahahaha, jkjk

Intense, Like Camping
Other results of summer have been that my nametag rusts on me.  Also, there has been a mystery about my special whites:  they’re turning red???  Am I sinning??  Haha.  Thankfully, Sister Diller told me that some of her sunscreen actually turned her whites red, too.  Well, THAT stinks.  Here I am, trying to be good to my skin; and now it makes more work for me doing laundry.  Oh well.  Bug spray also makes all the blowing sand stick to my legs.  Oh, the mission.

Going Out With a Blaze of Glory
In the final days of her mission, Sister Diller and I had a family married and baptized this weekend!
They actually have been in the works for a while now.  Jackson’s sister and mom were baptized 3 months ago. Vangela’s family was baptized when she was a teenager, but she refused to get baptized because she was embarrassed to get in the suit since she was fat.  Really, the best gems of the mission have been from people who have already been part of the Mormon life and just haven’t realized they can make further covenants with their Heavenly Father through the Church of Jesus Christ.  They’re already living a good life and know the gospel, so why not promise to God and receive the blessings of it?
During most of the wedding and baptism, Vangela cried and Jackson smiled.  We were worried that Jackson wasn’t quite ready nor willing to change and be prepared for baptism.  But when he was all dressed in white,
The wedding of Jackson and Vangela
November 10, 2012

A beautiful end to a beautiful weekend.
Like I said...
“Going out with a blaze of glory.” 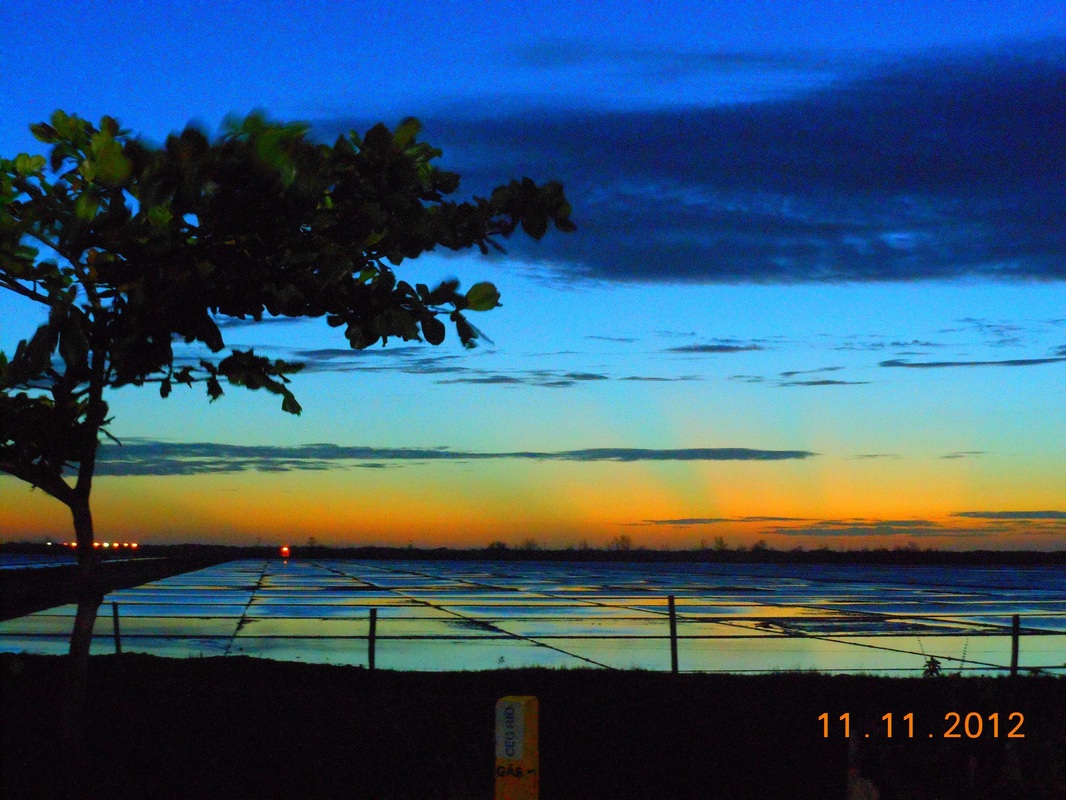